Buddhism cannot be called a religion, since its beliefs neither refer to any supernatural powers, nor it reveres any people, as embodiment of God. Even the founder of Buddhism – Siddhartha Gautama – is not in any  way exalted, and he himself did not expect, from the followers of his philosophy  this kind of treatment.

What exactly is Buddhism i it cannot be called religion? It is simply a movement, an association of people who want to penetrate the mystery of their life through meditation and live in accordance with the teachings of the Buddha.

According to its guidelines, every person regardless of race, creed or origin should be treated with all due respect. People must renounce all acts of aggression and physical violence against others, even if they are attacked Buddhist should do everything in order to do not respond to violence with violence. The elimination of the suffering from human life is the main goal of every Buddhist. Additionally, to become a true follower of this movement one need to take care of their own spiritual development, as well as physical, because in Buddhism there is no separation between body and spirit. Therefore, both meditation and forms of physical activities, for example yoga, are important. 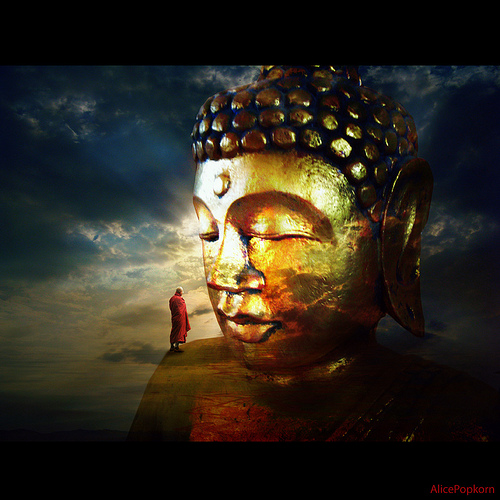 Although Buddhists are not considered as a religious faction, they have  their holidays, during which they worship different beliefs. Those beliefs can be divided into three groups, when they worship the Buddha, the teachings that he gave and the spiritual community.

1.      The first and the most important holiday is a celebration of Buddha’s Enlightenment, and as the name suggests we know what it is related to. It takes place at full moon in May or June.

2.      The second holiday is a day of Dharma,  Buddhist teachings celebrated on the full in July.

3.     The third holiday takes place at full moon in November, and it is related to an expression of devotion, gratitude and respect the Spiritual Community, the name of the holiday is a day of the Sangha.

4. The fourth holiday reveres the day of death of Buddha in full-time in February. The festival is a day of Parnirwany and, like the Christian All Souls Day, reminds of the inevitability of death, and recalls the deceased loved ones.